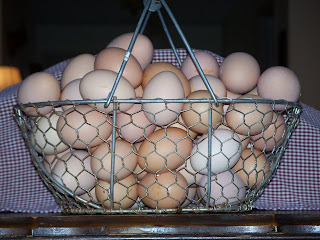 The origin of real food is a mystery to most. I am always amazed to hear statements from individuals who don't have a clue regarding home grown vegetables, free range eggs, and farm raised meat. Take eggs for instance. When I had an abundance of eggs and tried to give them away, I was told that one individual didn't like eggs from chickens, she liked to get her eggs from the store. On the flip side, there was the time I posted signs that said "Free Range Eggs" and had a flurry of customers stopping by the farm to pick up their "free" eggs! At the produce stand, we have had to give detailed instructions about preparing the most simple of vegetables. It seems that if the vegetables do not come in a can, people don't know what to do with them. Making products from milk such as butter and cheese has become a lost art. The more intimately involved I have become in producing real food, the more I have realized that there is a need to educate the general public as to it's origin. People are so far removed from the farm, these days, that educating them about the origin of their food has become as much a part of my day as actually growing and selling the eggs, meat, and vegetables. Farmers a century ago would have never dreamed that society would become so far removed from the source of their food. I wonder where all the farmers will be a century from now?