My Hubs, The Scouter

Yesterday I was reading a blog post about a hubby and kids building a fire in a pit to roast some hot dogs. It brought back a memory of Love Bunny and the day he.........well, let me start from the beginning.

We had moved to Idaho a few years before and our neighbors to our rear were an elderly couple named F and G, for the sake of anonymity. They were in their 70s when we moved here and they were never blessed with any children. They took us under their wings and thought of us as the youngsters they never had. Actually, she fell in love with Hubs and I was gettin' a bit concerned there for a while. When she had her teeth in she was pretty enticing, let me tell ya!

I'm including some pictures for you to visualize this. Our house was on a small street and on a corner where there was a private drive and there were 2 houses "behind" us. Our driveway was HUGE - enough that a Mayflower moving van could turn around in it without backing up once. So the back of our house looked into the front of those 2 neighbors. (See pix #1.)

Pix #1 Front and Back of house with "side" street and back driveway and garage. 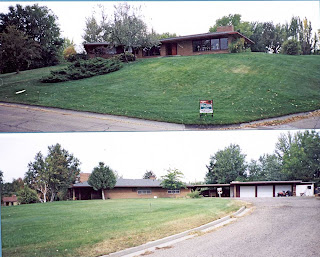 In front of their house, but to the back of our house, was a blacktop driveway with a "garden" between. F & G put it in themselves so as to give them a prettier view and had some evergreen bushes in there. (See pix #2.)

Pix #2 That is their house through one of our back bedroom windows as seen on pix #1 bottom pix. Please enlarge to see what I'm talking about. Okay, now that I've thoroughly confused you, on with the story! It doesn't get much clearer, trust me!) 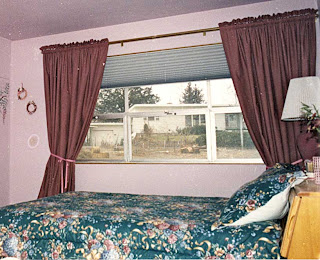 Love Bunny has been a life long scouter - Boy Scouts - and he's more knowledgeable than any man I know about "scouting" - and one day he wanted to go out in the yard and "control" the weeds. It starts getting frightening about this part of the story so you may want to plug your ears and cover your eyes, chicks!

He had just gotten a "weed burner" a little while before and was burning the little weeds out back. Around that "garden of evergreens" were some "weeds" so he proceeded to burn them Weellllllll, before you knew it the whole shebang was blazing! Hubs tried to put it out with the water hose out there but it would have NONE of that. The other neighbor was the town doctor and his wife started yelling and asking if he wanted her to call the fire department. (See pix #3. Her house is the one on the right with the truck parked. F & G's house is on the left behind the infamous "bushes".) 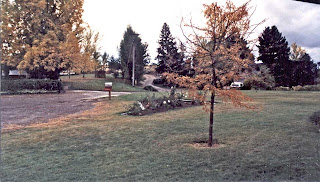 Okay, just GUESSSSS what hubs said......hmmmmmm?? Of course, nuuuuuu, he could put it out himself he says. Well, luckily, R - again for the sake of anonymity - the doctor's wife who ALSO adopted us(!) - called and the FD came with their BIG hoses and it was out posthaste. Hubs was worrying he'd be the one that killed F & G and just wanted to put it out before it reached their home - a very short distance from the blaze now consuming all the oxygen within a mile radius!! He was MIGHTILY embarrassed about the whole affair and his scout troop never did let him forget it. (Hmmmm, upon reflection, do I REALLY want him to take me "camping" Labor day?!??!) After the fire, Fern put in plastic, YES - PLASTIC, flowers!!! They stayed there until she died; I then ripped them out. Loved that old couple and they were a "HOOT"! I may blog more about the "Misadventures of F & G" someday. ;-)

I had more for this blog but I think that's about all you chicks can take for one day about the adventures of this family! 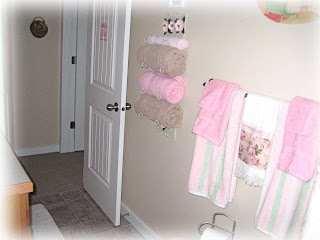 But now what in the heck do I do with all that stuff that I took down from the trellis?? I don't know. This may require a redo of my craft room AGAIN! Actually, I KNOW it is going to require it!! 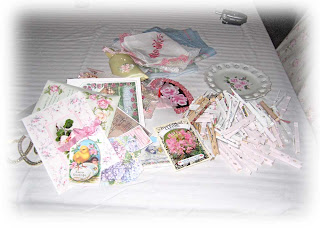 My sweet blogging chicks, do you know how far behind I am on surfing blogs?!?!?! I had 80+ to catch up on and was goin' real good at it and then all of a sudden when I was down to ONLY 2, my Google Reader clicked in and said I was 30+ MORE to read. I may not post every day after this. I HAVE GOT to read other's blogs!!!