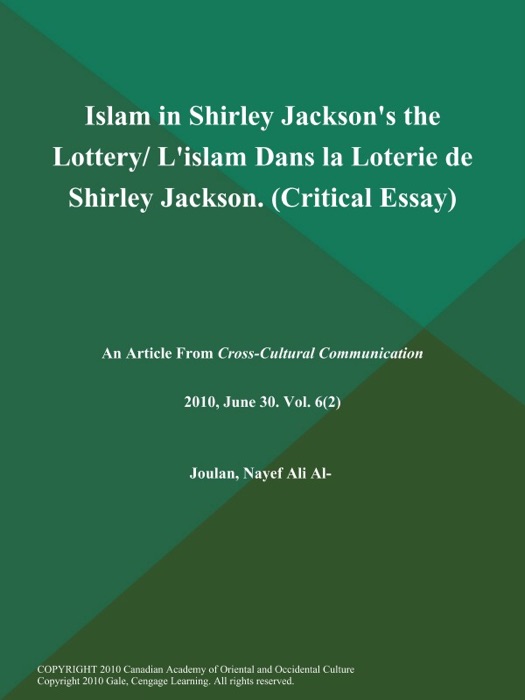 "It isn't fair, it isn't right" Mrs. Hutchinson cries in The Lottery (254), Shirley Jackson's much phrased story, mostly anthologized as an example of and exercise into reading and decoding symbolism in literature. A shocking narrative about scapegoat, The Lottery is built on a narrative structure that makes the reader share in the criminal act, for it is too late in the story when the reader does realize that the winner of the lottery will be stoned to death. (2) As such, it is not surprising that when the story was published in The New Yorker in 1948, a significant date indeed, it was received with public outrage, whereby people wanted Jackson to frankly reveal her intention behind writing the story. American readers felt antagonized by the narrative and demanded clarification from the author. In her biography of Jackson, Lenemaja Friedman reported that when the story was published "no New Yorker story had ever received" a similar response by readers, hundreds of whom sent letters that were marred by "bewilderment, speculation, and old-fashioned abuse" (Friedman 63). Kyla Ward also noted that "The New Yorker was besieged with letters" for weeks afterwards, some protesting about the "violent and pointless story, some praising the brilliant moral allegory, but most demanding to know what it meant" (Ward). The story has been mainly thematically read in the light of emphasis on the evil nature of humanity that lurks beneath the surface of ordinary life, particularly in rural American communities, sometimes related to a genre called the 'family tale'. In such readings, Jackson's narrative and her other works were considered treatments of everyday life, family life, prejudice, neurosis and identity. However, the feminist note is almost evident in all critical responses to the story. As Peter Kosenko argued: