When Princess had difficulties that coincided with the labor and delivery of her calf (detailed  here in part one) that left her depressed, dehydrated, and unable to stand (detailed here in part two), we knew that in order to give her every chance possible at recovery, we were going to have to find a way to lift her.  She had been down almost 24 hours by the time we received the supportive therapy from Dr. Cromer (detailed in part two) and during that time we had rolled her from one side to the other to keep the circulation from being cut off in her feet and legs.  (This is extremely important in the event of a downed cow that can't be lifted for whatever reason.)  Having dealt with a few downed cows in the past, I have always strongly advised others to get their cow lifted as soon as possible.  I really believe that the faster you can get them up, the greater their chance of recovery.  However, this particular situation proved difficult.  First, Princess was inside a stable that did not have a door big enough for us to get the forks on the tractor inside of it.  Second, the set up in this particular area involves three buildings  sitting in a "U" shape in close proximity to one another making it a tight squeeze to maneuver the tractor into position.  (Imagine a long building at one end with the other two buildings across from one another.  Making things even more difficult, the small space is fenced and gated.  The tractor had to go between the fence and bottom side of the two buildings that sit across from one another and make a tight right to get between those two buildings. Then the tractor had to make an immediate left to turn toward the door of the stable where Princess was laying.)  In addition to these difficulties, the winter weather we have been dealing with for the past few weeks had left us with a literal sheet of ice in this area.  When Mike first attempted to bring the tractor in on Monday morning, it slipped and slid on the ice  It didn't take long for us to realize that even if we got Princess out of the building to lift her (as there was no way for us to get the forks on the tractor into the building to lift her inside it), she would not be able to stand on the ice.  (I should back up even further and state just to get through the gate to get into this particular area, Mike had to shovel a huge pile of snow that I had stacked there during our last big snow storm.)  After our failed attempt to get in to lift Princess Monday morning (before the vet had treated her when she probably was in no condition to try to lift her anyway), Mike spent most of the morning manually chipping away the ice so that Princess would have an area to stand once we got her out.  Fortunately, nature decided to help us out. The temps rose, and the sun shone on the area where Mike chipped the ice, and it began to melt.  Mike then got buckets of saw dust from the saw mill and spread it on the ground in an effort to dry the area further and provide traction.  By late afternoon, we had a much better situation for attempting to lift Princess.

Meanwhile, Princess was eagerly munching on hay for the first time in over twenty four hours and was much brighter in disposition.  I still could not get her to drink from the bucket, but wasn't too concerned at that point considering the amount of fluids we had been able to provide through IV's and drenching earlier.

When we were finally ready to lift Princess, we first needed to get her out of the building.  We were able to get her as close to the door as possible and then we hooked to a halter we had put on her.  Pulling her out of that door with a rope attached to the tractor was difficult for me to watch, but I knew there was no other way to save her other than to get her out of that building.  Once we got her out of the building, we were able to attach the hip lift.  (We had been loaned two different types of lifts by two different local dairies who had heard of our plight and offered to help.  We are so blessed to have such good friends and neighbors.)  We opted to use the hip lift but one can also use a sling.  The down side to using the hip lift is if it has to be used multiple times over a period of days,  it does begin to rub the skin off and create sores on the cow's hips.  When we lifted Princess up using the hip lift, it was obvious at first that she didn't have her footing or balance and that she wasn't able to put her weight down completely.  Mike kept the lift taunt and we just let her rest in this position allowing the blood to circulate through her legs. 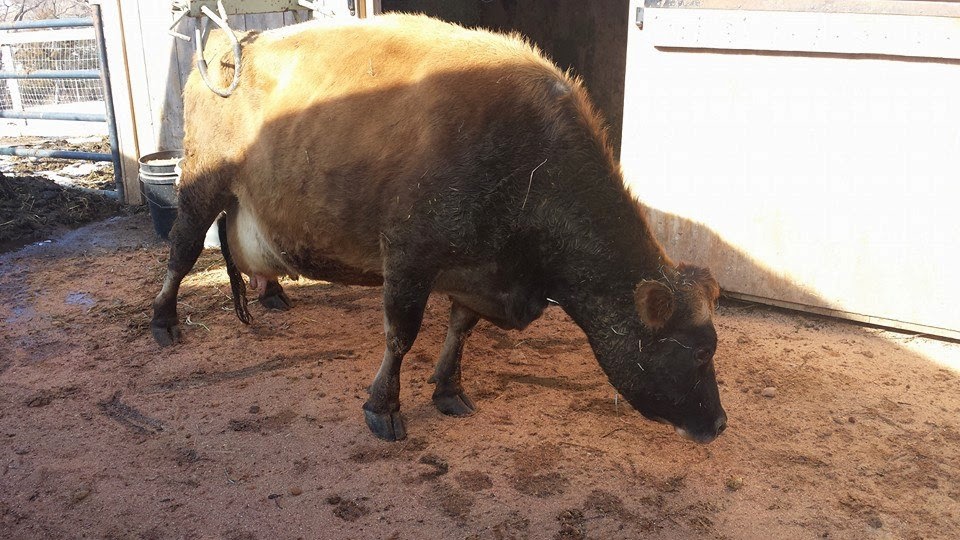 Then, Mike eased the tension on the hip lift.  In the past when we have done this with other cows and the cows have their footing, they can get pretty wild thrashing and carrying on while hanging from the chain with hip lift attached.  When Princess realize she was up and had her footing and balance, she tried to go forward and I immediately stepped in front of her and began to talk gently to her and rub her head.  There is no way this would have worked with our beef cattle or even with some of the dairy cows we've owned in the past, but for whatever reason, Princess remained perfectly calm and allowed me to keep her company there.  I even took the opportunity to whisper in her ear and tell her that she was going to be all right and that I love her.  (I don't know how much animal's understand, but I do believe they sense when we care for them and perhaps they understand more than we think they do.) 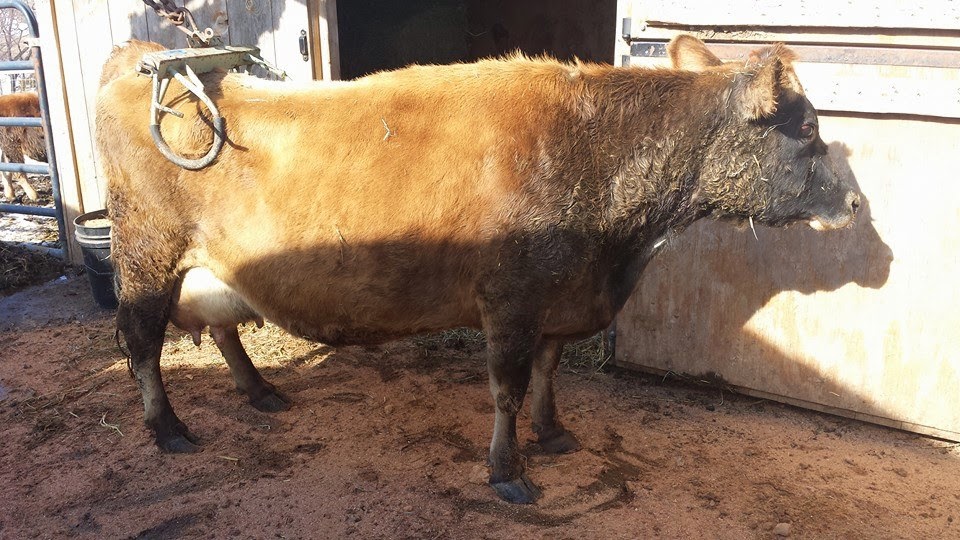 Princess and I stood there for a few minutes and then we took the hip lift off of her and she walked away.  Of course, I was thrilled and didn't even try to contain my excitement. 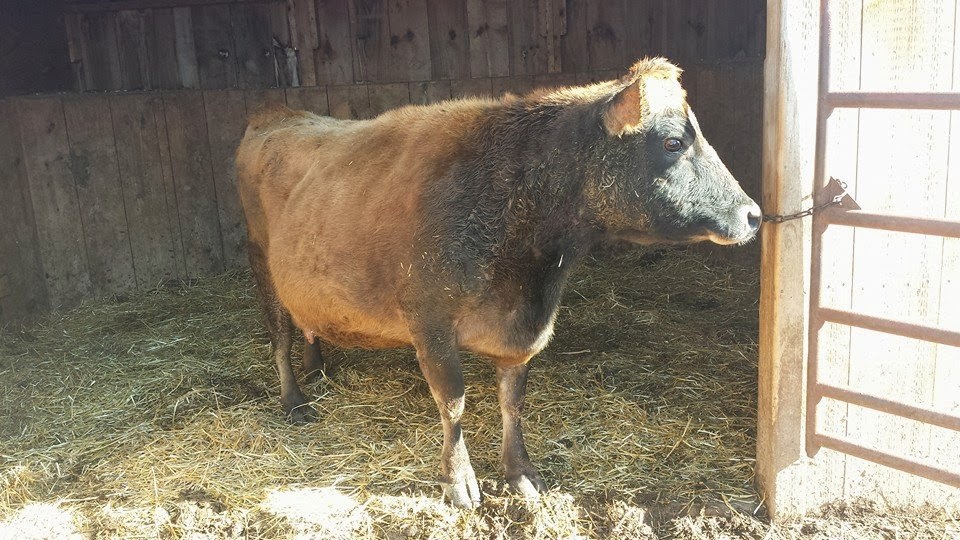 We gave her a bucket of water and she drank well.  We gave her some hay and grain and she began to eat.  We brought her calf out to her and she greeted and licked him. 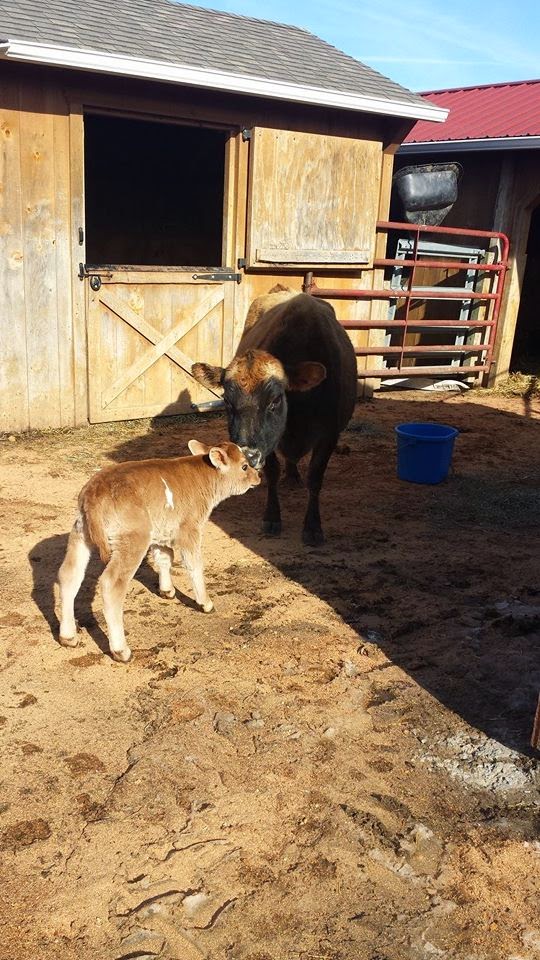 Then she caught her foot going back into the shelter when she didn't lift it high enough and fell to the ground.  My heart sank, but I knew we would just have to lift her again. This time, I shut off the shelters so she couldn't go inside.

She stood around for several hours that evening before she decided to lay down on the ground.  I checked on her later in the evening and tried to get her up and once again she seemed unable to stand.  I didn't despair.  I knew that it sometimes takes lifting cows days or even weeks before they regain the needed strength to manage on their own.  We just made plans to lift her again in the morning.  In the middle of the night, I went down to check on Princess and she was laying pretty much where I had last seen her.  I offered her water which she declined and hay which she ate.  The next morning when I turned the corner in the barnyard, there was Princess standing on her own! 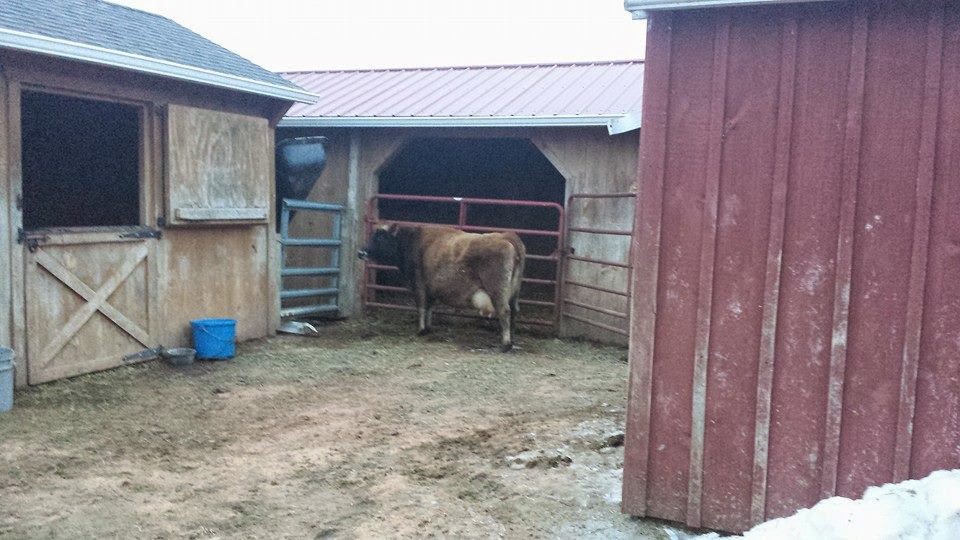 This story could have ended differently and we are so very thankful that Princess recovered so quickly and thoroughly.  She seems none the worse for her ordeal.  The only thing that we can determine as far as a diagnosis is concerned is that she must have had calving paralysis (although it's odd that it began before the calf was born).

Calving paralysis is a commonly-used term to describe the paralysis of the hind legs which is seen in cows just after calving. It is caused by damage to the obturator nerve as the calf passes through the pelvic canal. This condition is most often seen after difficult calvings, the birth of large calves, or prolonged calvings. The cows are down, but alert and bright, usually eating. Most of these cows will recover with time and medical therapy. (Information derived from this link)

Princess situation was then complicated by her inability (or unwillingness) to eat or drink.  Once we supported her with plenty of fluids and got her re-hydrated, controlled her pain with banamine,  and got her lifted to her feet, she was able to bounce back quickly.  We were very fortunate that our ordeal ended on such a positive note. 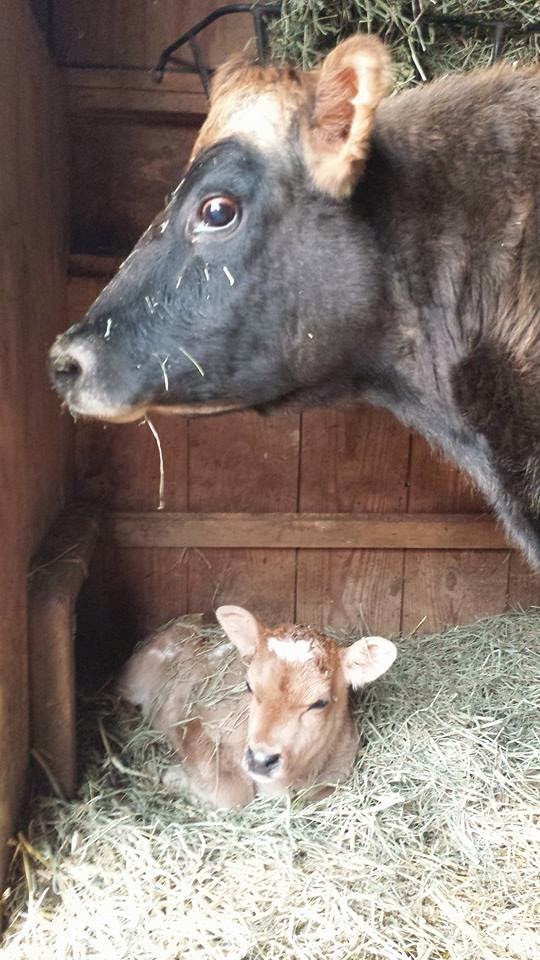