Can You Hear Me Now?

It was a beautiful day in the neighborhood.  You couldn't see ten feet, meaning I felt like I didn't have any neighbors.  How sweet it was!  And quiet .... even the roosters don't get up early when it's foggy.

I took a quick glance at my schedule for the rest of the week.  I'm booked solid.  Funny how you can sit for two weeks straight, then all of a sudden you're slammed!

I realized, thanks to my company, that I have no fire alarms monitored by my security service.  This house is like Fort Knox, but could burn to the ground before the neighbors heard the smoke alarms or called anyone.  Today I will be escorting someone into the attic to set up two alarms.  Wait until they see how they have to get in the attic!  That's always good for a laugh or two!!  I'm hoping he's a handsome devil!!

This is the guy I spoke to trying to get an estimate.  Apparently there is an ORDER and my asking for a price first just didn't set well.  He wanted to sell the entire kit and kaboodle BEFORE giving me a price.  I mean really, he sent a contract to sign before I even said yes.

I'm hoping he's not going to be the installer, who will arrive at 1:00 today.  The good news is I only have to pay for installation.  Monitoring is included in my plan for free. 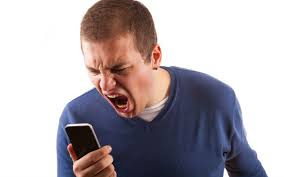 Now for a trip to the grocery store.  In spite of our illustrious idiot governor ... sorry, but there's no other way to describe him ... no one is following any stay at home orders except a few die hard democrats.  You see he has broken his own rules big time ... TWICE.  So now, not surprisingly, no one believes a word he says.

The store was crowded at 8:30 am.  I gathered up everything I needed except Christmas cards.  Oh darn ... there's a lady standing there looking at EVERY SINGLE CARD.  I tried to be patient, but she continued to look, coughing all the while and completely blocking the entire selection.  I took a long stroll around the entire store and returned.  She was still there, coughing and handling each one.  My apologies, because no one is getting a Christmas card this year.

Sadly, hams were running $45 and up.  They did have a buy-one-get-one-free sale, but I did that with the turkeys.  No thank you!!  Besides, Cooper cannot have ham.  I ended up with this one for $28. 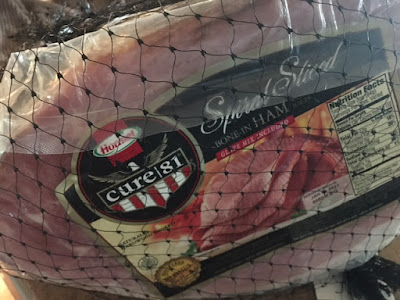 Back home again, I was back on the phone ... can you hear me now? ... trying to cancel appointments due to my early departure and set up new ones.  Where I would have been sitting on the couch, I now have to run all day just to keep up.

A call to one of my clients to finish up her year end tax work came to a screeching halt when she was notified that the ceiling just caved in on one of her newest rentals.  How could that be?  Apparently the tile roof leaked enough water into the attic to soak the sheetrock ceiling.  What a disaster!!  At Christmas no less.  I said a little prayer, thankful it wasn't MY house.

Two more calls revealed two close friends caught the virus.  They stayed home, took over the counter meds for flu and cold and survived.  But how could that be?  You will DIE if you catch it!  They said it was just the same as having the flu and they are now fine.  Good to know.

Finally off the phone for the day, I whipped up a couple of pound cakes, just trying to use up that vanilla pudding I bought.  Who knows why, but I found 3 packages in the cupboard.  It doesn't taste all that great because I didn't get fresh lemons, but my sweet tooth just doesn't care. 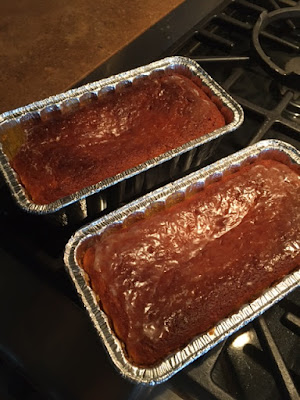 In the meantime, it's pack pack pack.

By the way, no sign of skunks or raccoons, but the big yellow kitty sits on the back fence and stares at me for hours.  I think he's waiting for more dinner!!