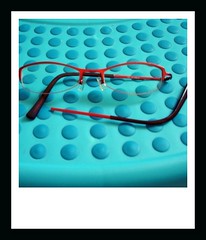 I was brushing my teeth this morning when I heard Adrian shout. I thought Lavigne had poured powder all over the carpet or something along the line. He came into the bathroom with my spectacles, bent. Many times I managed to save it from her hands but not this time. I tried to bend it back very gently but broke it instead. So you could say it was I who broke my own pair of spectacles. This is, in fact, my spare pair. I had it made before we came to England as I'd anticipated Lavigne breaking my spectacles just like her sister had done. Louisa didn't just break one but TWO of my spectacles. I had just taken this pair out to wear a few months back as my old one was getting loose. Well, at least I feel comforted by the fact that it was this cheap and brandless make that was broken and not my other expensive pair.
Adrian lost his mobile phone when we went to Staines to get some shopping done. He reckoned he had dropped it while getting the girls into their car seats. We went back to the same car park lot (which wasn't occupied after we left) within 5 minutes after leaving but it was nowhere to be seen. A middle-aged man had just parked his scooter next to our car and smiling to us just before we left. Adrian wrote a note asking him to contact us should he have seen the phone and left it at his scooter. It's been 3 hours and we've received no calls. The phone has been switched off and I'm sure the new owner must be gleaming away. It was a PDA mobile phone. Luckily it's a Pay-As-You-Go SIM card and there's not much value in it. I think I am more upset by the loss than Adrian. And guess what? We were looking at some cool mobile phones earlier on.