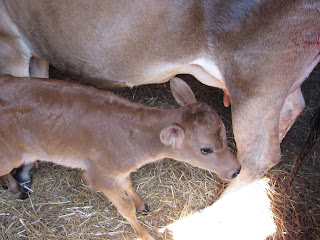 As promised here are the details on our newest little heifer.

Apple showed signs of calving Friday morning and I believed she would give birth within 24 hours but did not feel that the birth was imminent. I finished up the morning chores and went down to the farm to help out with the garden and produce. When I came back to the house early afternoon, Apple had put herself in the stable, had a long strand of blood tinged mucous, and was dripping colostrum from her teats. I knew it would not be long until she calved but having not eaten all day, decided I had enough time to grab a quick bite. I was so excited (and nervous) I could only swallow couple bites of potato salad. When I got back down to the stable, Apple was on the ground and pushing. The baby was 1/2 out and before I could turn my camera on, she was born. I ran over to her fearing that she was not breathing and brushed the afterbirth away from her face. She was fine and Momma Apple was up licking her. I was so afraid to look to find out if it was yet another bull calf so I first called Mike to tell him that the calf was on the ground. He asked me what sex it was and I told him to hold on while I looked. I remember closing me eyes as I lifted the calf's leg to see. I opened my eyes and began screaming with joy, "It's a heifer! It's a heifer! I got a girl!" A little later, I called Mike back and told him that I checked five times and it was still a girl and that it had not changed into a bull calf! Mike's dad came up the next day, winked, and told me that if I gave him $5 he would verify that it was a heifer calf.

This little girl will be registered with the American Jersey Cattle Association and Registry. Her dam is Avonlea Apple of Pine Creek. Her maternal grand-dam is Glenholme Just Waits AnnaLisa.

AnnaJoy was sired by means of AI and her sire is Rapid Bay Glasgow . Her paternal grand-dam is Vandenberg Amedeo Gorgeous.